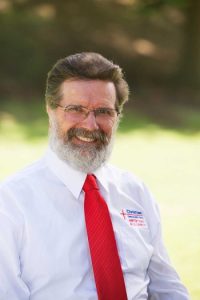 Community Involvement
Has been involved with a number of churches and para church ministries in and around Newcastle in a supporting ministry role as reguired.
Has been a candidate for both the Liberal Party and the Christian Democratic Party as well as being involved in policy development with both parties.
Currently he is the foundation organisor for new Christian political party – Christians for Community. C4C

Representations to the parliaments of NSW and Australia

I am Milton Caine and I live with my wife Mary, in Birmingham Gardens, which has been our home for more than 32 years.  We recently became empty nesters as the last our four children has moved to establish his own home in the local community. I am a member of the All Saints ANEW Anglican at New Lambton.

I drive a Newcastle-based wheelchair accessible taxi because I believe that people with disabilities should also enjoy life as much as they can and I am proud to help them do this. I love seeing these people enjoy themselves in the freedom that this taxi service gives them.

Born in Perth in 1952, I grew up with my 2 brothers and 5 sisters on a farm in Gidgegannup, Western Australia, not far away from the place where racing driver Peter Brock died in September 2006 in a horrific motor vehicle accident. I was educated at a regional country school in Mount Helena where all my family suffered discrimination because of our relative poverty. We, at times, had little or no food to eat at school and wore ill-fitting, hand-me-down clothes. I longed to get out of that poverty trap and though the struggle was hard at first, I broke through the poverty barrier and began to look down on the poor, to my shame. I became excessively proud of what I had become and I forgot where I came from; and that was extremely wrong of me; however today I want to empower all who are trapped in poverty to break free into self-confidence and independence.

In 1971, I became a Christian and went to a Bible College in Sydney, after which I went overseas for about 7 years and spent time in both Israel and South Africa. I saw marginalised people in both these places, but I was not one of them, so although I heard their stories in my head, and felt deeply for their plight, I did not really understand it in my heart. I was greatly moved much by the lot of the black South Africans and all the restrictions that were placed upon their daily lives. They were truly treated as third class citizens due to the colour of their skin. This apartheid policy was revolting to me and so I attempted to fight for equal wages for all people for the work performed and not disadvantaged because of the colour of their skin. During this action I did get to know many of the Zulu people, in particular, and they treated me with honour and dignity in spite of the prevailing government policy in 1979. This began to have a huge impact upon me in so many ways.

In the early 1980’s I returned to Australia to help a mate in a local church in Georgetown, Newcastle, where I began a more involved journey in politics, running for election several times. I got married in 1990 and the family soon began to grow so I had to step back from politics for the sake of the family. During this time my interest in politics continued but my views were refined/clarified as I became more involved in the lives of the people at MayCare (a ministry of Mayfield Baptist Church) and I saw their struggles as they tried to live with baggage from their past abuse (sexual, physical, and mental) and with the poor decisions they have made as a result of this abuse, many of them involved in substance abuse to cope with past traumas.

In the last fifteen years as Wheelchair accessible taxi driver and driving at night I have seen the suffering of the disabled person and the nightlife in Newcastle front and centre. I understand a new direction is needed and I have some strong ideas to give that direction in Newcastle.

I began listening with my heart and my judgement changed as compassion flowed to these people. Trying to discover a way to help people trapped in these situations, I began to see that the traditional answers to problems are not working, and that we are all only a few steps from falling through the cracks. A couple of poor decisions could leave any of us destitute. That is a scary thought.

As I considered these things, I could see that the focus of our governments needed to change. I believe any government decision should be examined in the light of certain questions.

Is it in agreement with God? (God’s will, as revealed in the Bible)
Is it good for the family?
Is it good for the community?
Who would be disadvantaged by this decision?
Is it good for the environment?
Is it good for the planet?
Is it good for the international community?
Only one political party used to judge legislation by these criteria, and that was the Christian Democratic Party, sadly this party has fallen into the traps that so often entraps those who become so self-focused, and first lost its way and has since been closed by the Equity Division of the Supreme Court of NSW. However, I am helping a remnant of this party to negotiate a solid and Christian path forward so the real ideals that the party had once embraced can once again be the headline of this of a real Christian Political movement. We are doing that under a new party we are in the process of registering, namely Christians for Community or C4C.

It is with this background that I come to continue to seek to represent the people of Newcastle and the surrounding areas to whole of NSW in every way I can. I ask you to support us as we support you so that the Government of the people of NSW will well and truly be for the people of NSW so that true Justice and compassion will prevail in all the decisions of government and their departments in dealing in all matters with the people of NSW.